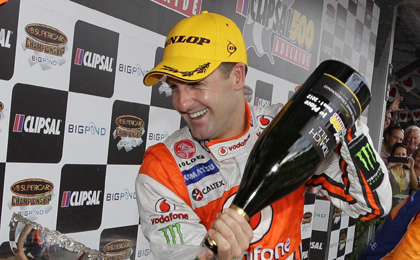 Jamie Whincup will remain with TeamVodafone, and as a V8 Supercars driver, from 2013 and beyond.

The news ends speculation that the three-time V8 Supercars champion will quit the sport and try his hand at an international motorsport career.

Whincup’s new deal sees him contracted to TeamVodafone until the end of 2014.

In the past two weeks, both Whincup’s team-mate Craig Lowndes and Holden announced a renewed three year deals with the champion team.

“It feels great knowing that I am settled long term, in an environment that I am happy with, and that has the enthusiasm to continue to set the benchmark,” said Whincup.

“I look forward to working with and sharing more challenges and success with my friends at TeamVodafone and their team of valued corporate partners. It’s also an important time for me to be close to my family (ED: Whincup’s father recently passed away).

“My whole focus is on this years V8 Supercar Championship, however I look forward to working with the crew and being a part of the development process of ‘Car of the Future’.”