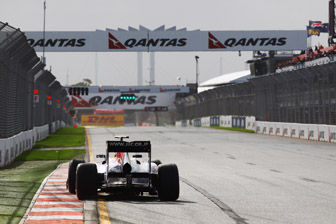 After using BBC’s feed since it returned to the sport, Ten has elected to give Australian audiences Sky’s vision and audio.

The change has come about after a split in broadcast rights. Pay channel Sky will show all 20 Formula One events this year, while the BBC has rights to broadcast 10 events.

Sky’s ‘race’ commentary team will be headed by David Croft, Martin Brundle and Anthony Davidson, while Ted Kravitz and Natalie Pinkham will be the network’s pitlane foot soldiers.

“We are using Sky commentary in 2012,” Rust told Speedcafe.com.

“I’d like to personally thank the BBC for all of their help over the years, and also welcome in the Sky boys.

“It all starts with qualifying and the race here in Australia this weekend.”

Ten will offer three days of race coverage this weekend. See below for a full timetable of broadcast times.

Jack Perkins will be a expert commentator for the weekend, while Richard Craill will make his debut on Network Ten calling the supports.