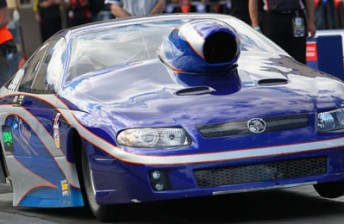 62-year-old Queenslander, Denis Whiting has his eyes set on bettering the National record he set in Perth just a few weeks ago when the ANDRA Pro Series Pro Stock Championship resumes at Sydney Dragway, March 24-25.

Whiting believes there is more time to come from his Monaro – his new record of 7.022 coming with him shutting off at the 6.8 second mark in the run.

“On our 7.022sec run I clicked it at 6.8 seconds into the pass. There is a bit left to come,” said Whiting. “(Achieving a six second time is) quite dependent on the conditions. We need track temperature at optimum. If we can survive through first and second gear it is on, we have a good chance of running a six.”

Whiting’s attack on the last round of the championship resulted in him seizing every point available as he won the event, top qualified and was awarded bonus points for low elapsed time and top speed.

A shift to imported USA engines has made a huge difference to the 62-year-old Company Director – who is now a legitimate challenger to the likes of the Tremayne brothers.

“The engine package is pretty stout, it has a lot of torque which is the secret to these things,” he said. “That’s what you need to get through the gears, it recovers very well on the gear shift.

“Up to two years ago we were doing our own engines but I am a manufacturer and that is what I should stick to doing. We got two years behind and got lost and blamed everything except that we just didn’t have the power.

“This (new engine) has been in the pipeline for us for 12 months or so, we have been creeping up.”

Another factor may be ANDRA allowing a different fuel to be used for the first time in competition. The VP fuel – codenamed PSX-AU – it is believed by Whiting may add up to 20 horsepower to the environmentally sensitive Pro Stock machines.

“The new fuel should provide an extra 20 horsepower, that’s what the figure that is going around. It’s better in some motors than others.”

Pro Stock will be joined by Pro Stock Motorcycle and Top Doorslammer at the March 24-25 Sydney Dragway event.