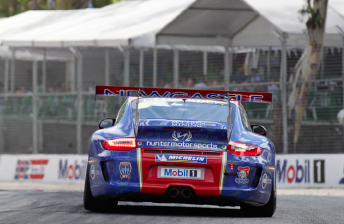 Jonny Reid will make a comeback to the Porsche City Index Carrera Cup at Albert Park this weekend.

Reid will replace Nathan Tinkler who will miss the meeting due to non-racing commitments.

The fast Kiwi did not make the opening round of the series at Adelaide, but is keen to make an impression on his return to the class.

“I am ecstatic about returning to the Porsche City Index Carrera Cup Australia for the Grand Prix in Melbourne,” Reid said.

“Missing Adelaide means that the championship hunt for me is a long hard road. I am focused on winning races and point my career back in the right direction.”

“All the credit to Nathan Tinkler. Í want to personally thank him for his belief in me and this for this huge opportunity,” he said.

“As soon as Tony from Tinkler Motorsport rang me and mentioned that Nathan was keen to offer his seat for me to race the AGP I immediately took up the opportunity.”

The first Carrera Cup session for the race weekend will be held at 1440 on Thursday.