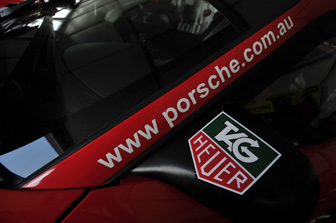 TAG Heuer has announced it will rejoin the Porsche City Index Carrera Cup Australia in 2012 as a series partner.

TAG Heuer returns as an ‘Official Watch’ of the series, having had a long standing history with Carrera Cup in Australia.

The new partnership sees the return of the TAG Heuer Carrera Challenge, a championship for the Elite Class drivers.

The TAG Heuer Pole Position Award has also been added to the championship, which awards the quickest qualifier in both the Professional Class and Elite Class at the conclusion of each qualifying session.

Porsche Cars Australia Motorsport Manager, Jamey Blaikie, is delighted to have TAG Heuer back on board.

“Carrera Cup and TAG Heuer have a great history in Australia and it’s great to reignite the partnership for the 2012 season,” said Blaikie.

“TAG Heuer is an exciting brand and one that fits well with the values of Porsche and Carrera Cup and a perfect fit to have as the Official Watch of the championship.”

“Right from the start, TAG Heuer has kept level with every breakthrough in automobile speed, precision and design. It is this rich history in motor racing together with our strong association with Porsche over the decades that makes this partnership the perfect fit.”

The Porsche City Index Carrera Cup returns to the track this weekend for Round 2 of the championship at Albert Park.