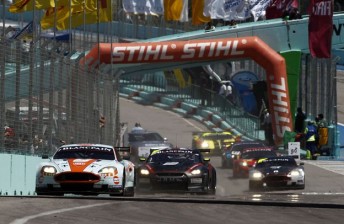 Aston Martin will again be on the grid in 2012, while Nissan will not

The FIA GT1 World Championship’s immediate future has been secured following the signing of three new teams for the 2012 season.

After months of behind-the-scenes effort by series promoters the SRO Motorsports Group, the make-up of the 2012 field has been confirmed, with nine brands set to be represented at the first race in France (Nogaro) on 6-9 April.

Stephane Ratel, founder and CEO of the SRO, was instrumental in bringing together the deals that has put Aston Martin (Valmon Racing Team Russia), Porsche (China GT1 Team) and Ford (Sunred Engineering) on the grid for the coming season.

The new signings bring the entry list up to the 18-car contractual minimum required for the series to continue as an FIA World Championship.

“I am delighted that the Stephane Ratel Organisation was able to orchestrate the establishment of three additional teams to bring the grid up to 18,” said Ratal.

After two seasons run under its unique GT1 regulations, the class has switched to GT3 rules for 2012, allowing the influx of new brands to take place.

See below for the 2012 FIA GT1 World Championship entry list

* Subject to the FIA confirmation