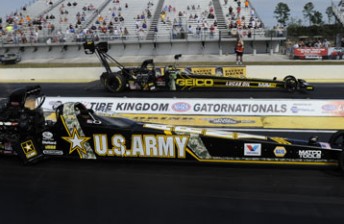 Morgan Lucas set the second quickest time in NHRA history in taking out the Gatornationals NHRA Full Throttle Top Fuel Title, defeating Tony Schumacher with a 3.743-second time at 326.87 mph. It was completed on Monday morning (US Time) due to a rain delay on Sunday just prior to Semi-Finals.

It wasn’t all bad news for Schumacher who took the Full Throttle Championship lead by virtue of his second final round appearance of the season.

Whilst sitting inside the top 16 for much of qualifying – Cory McClenathan in the Australian Rapisarda Racing entry failed to qualify for his first NHRA event this season, ending the four sessions 19th with a 3.964 second time.

Robert Hight took the third straight win for John Force Racing aboard the American Auto Club machine, defeating Johnny Gray in a pedal fest. It was Hight’s second win of the young season and he moves into second place in points standings behind team-mate Mike Neff.

Hight had an easy passage into the final when Jack Beckman red lighted. John Force’s nightmares about female competitors continue – he was taken out in the second round in succession by a female racer. Alexis deJoria in the Tequila Patron entry bundled the Castrol GTX High Mileage car out in round one, before being knocked out by Beckman.

Courtney Force went out in the first round also, being defeated by Ron Capps.

Mike Edwards took the 33rd win of his NHRA Full Throttle Pro Stock career, defeating Greg Anderson in the closest of races – a 6.566 holeshot win to a 6.538.

Anderson’s consistency – he’s been in every final round this year – sees him hold a 44 point Championship lead.

Eddie Krawiec had a dominant weekend in Pro Stock Bike, walking away with the perfect score for being the fastest in all four qualifying sessions, setting a new national record and opening the defence of his 2011 Title with a win aboard the Screamin’ Eagle Harley Davidson – just the second rider in history to do so.

He crossed the line a mere five feet ahead of team-mate Andrew Hines.

It was Krawiec’s third consecutive Gatornationals win and the 12th final round win of his career.

Krawiec deposited Matt Smith in the Semis, whilst Hines had to get past LE Tonglet and Hector Arana Jr in a tough draw to make the Final.

The next NHRA Full Throttle Drag Racing Series event will be held March 30-April 1 at The Strip, Las Vegas.