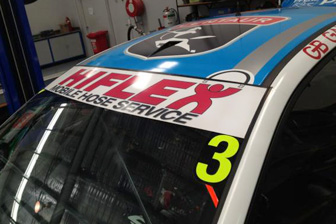 Tony D’Alberto has revealed a new sponsor for the remaining events of the 2012 V8 Supercars Championship.

The deal will remain in place for the duration of the season.

Hiflex is the mobile service arm of Alfagomma Australia – a hose, fitting and adaptors company.

D’Alberto’s team, which recently signed Pfred as its major backer for the Clipsal 500 and Australian Grand Prix support races, says he is pleased to have the extra support.

“We’ve been talking with the guys from Hiflex for a while and it’s great to have done a deal with them,” D’Alberto told Speedcafe.com.

“We’re really happy to welcome them to the sport. They are trying to get their brand recognised. They are a terrific bunch of people, and they’ll be at the Grand Prix for their first race meeting to see what it’s all about.”

After the two races at the Clipsal 500, D’Alberto sits 15th in the V8 Supercars Championship.

Starting Thursday, D’Alberto’s Pfred Ford will be at Albert Park with the rest of the V8 entries for the non-championship races, supporting the Qantas Formula One Australian Grand Prix.