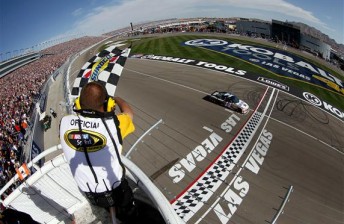 Tony Stewart has put behind a disappointing 2011 race at Las Vegas behind him to win the 2012 Kobalt Tools 400 at the same venue.

Stewart held-off a determined Jimmie Johnson after a restart with four laps left to take the chequered flag 0.461 seconds ahead of the five-time Sprint Cup champion.

The victory was Stewart’s first at the 1.5-mile track, leaving only Darlington and Kentucky as active Cup tracks at which he hasn’t won.

“It was a tough day out there trying to dial the car in for the conditions,” Ambrose said.

“We managed to get a reasonable handle on it for the last few laps, and we made up some positions.

“The DEWALT crew were kept busy today, but we kept fighting for it.”