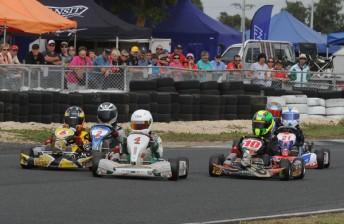 The youngsters in the Cadets category put on a spectacular display of racing during their final. (#6 Montalbano, #4 Smith and #10 Doohan) Pic: AF Images

Jack Doohan has finished on the podium during his championship karting debut at the Victorian Karting Championships in Geelong today.

After qualifying 18th on Friday, Doohan came back from an incident in heat one to record a sixth placing in the pre-final to secure a third row start for the 22-lap final.

He battled with fellow front-runners Benito Montalbano, Harrison Hoey, Joshua Smith and Joel Jamieson throughout the journey, enjoying several laps in the lead.

At one stage, there was a nine-kart freight train at the front of the 26-driver field. When Hoey and Doohan had a slight coming together mid way through the race it separated the leading pack and allowed Benito Montalbano, Jai Sparey and Joshua Smith to open a buffer over the field.

As the race progressed the leading trio exchanged the front running on a number of occasions which allowed Doohan, Jamieson and Sam Dicker back into contention.

Following a number of frantic laps, it was Smith who won the drag race to the chequered flag by 0.022 seconds ahead of Montalbano and Doohan.

In other categories, it was In another hard fought battle it was Melbourne driver Leigh Nicolaou who held on for a narrow victory in the highly competitive Clubman Heavy category while Joseph Mawson took out the Clubman Light title.

Drivers from the home state claimed nine of the 14 titles on offer.