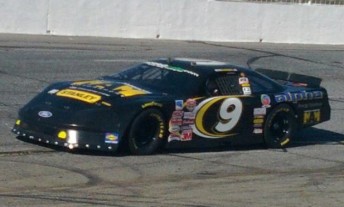 The opening round of the 2012 UARA Stars Series proved to be an up and down affair for the Marcos Ambrose Motorsport duo of Ben Rhodes and Clayton Pyne, with Rhodes storming through from the rear of the pack to finish fourth.

Held over 100 laps at the historic 580m long Hickory Motor Speedway, Pyne and Rhodes qualified 10th and 11th respectively in the 18 car field.

From the opening green flag, Pyne found trouble, with the number six Ford heading to the pits with bent steering, effectively ending his day before it begun.

Rhodes however made a strong start, leaping up to seventh position before the first of several caution periods slowed the field on lap two.

From the resumption of racing, Rhodes settled into eighth, with his strategy in the early running one of tyre conservation.

In the middle portion of the race, Rhodes drifted between sixth and eighth on the race track, prior to a spirited battle with Dillon Bassett that ended when Rhodes spun toward turn one on lap 57.

With no serious damage evident on the flagship number nine machine, Rhodes took in the green flag from 14th position.

From there, heavy traffic made life difficult for the youngster from Kentucky until he cracked the top-ten with 25 laps remaining.

Off a late race restart, Rhodes made his move, charging to fourth position with 10 laps remaining, falling short of the podium in the run to the chequered flag.