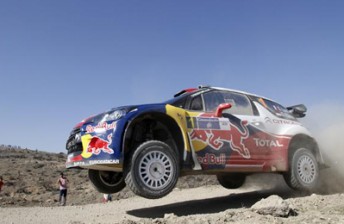 Citroen’s Sebastien Loeb has completed yet another faultless day at Rally Mexico.

Loeb’s steady day has put him in the box seat for another Mexican win, but he admits the Guanajuatito stage tomorrow, measuring 54.30 kilometres in length, will be a mammoth final test in securing victory.

“We are in a good position now with no need to take many big risks here in Mexico and looking good for a one-two finish for Citroen,” Loeb told Speedcafe.com.

“But there is still a long way to go especially with the big stage tomorrow but I have always enjoyed success here in Mexico and hope to continue this tomorrow.”

“I must finish before I get any points so I have to concentrate fully on the long stage tomorrow.” Latvala said.

“There’s no pressure and I don’t have to push to the maximum, but sometimes that’s not easy because you can lose concentration. I must keep focused because things can change right at the end, as we saw at the last round in Sweden when I nearly lost the rally close to the finish,” he added.”

Unfortunatly for M-Sport team-mate Evgeny Novikov, there was heartache as the Russian clipped the rear of his Ford Fiesta RS WRC on the final stage of the day, smashing hard into a stone bank and retiring for the day. He will start tomorrow under Rally 2 regulations.

Monster World Rally Team driver Ken Block enjoyed a better day in Mexico today as he moves back into the top 10 with one day of competition remaining.

“This afternoon has been a lot more fun. I really enjoy that stage [Comanjilla] – it is a lot more flat out and flowing – really good fun,” said Block.

“The twisty stuff like the long stuff this morning, I like it to a certain extent but when it is that long it can be real tricky.”

Block’s Australian team-mate Chris Atkinson crashed out of the event due to brake failure. CLICK HERE for Speedcafe.com’s full story.

Tomorrow’s final throws out one of the longest stages of the season and after leaving León, drivers return to the city’s race circuit for a final pass before tackling the massive 54.30km all-gravel Guanajuatito test.

Two more mountain stages follow before the finish in León at 15.00, including the final Power Stage where bonus points are on offer to the fastest three drivers. The four stages cover 74.76km.