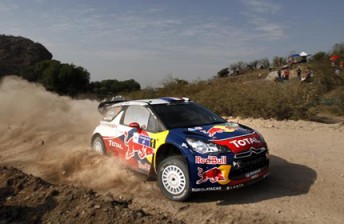 “It was cool to grab a stage win on Day 1 of my return to the world stage,” Atkinson told Speedcafe.com.

“We had an up and down day and lost some time with a puncture this morning but this stage win has given me a lot of confidence heading into tomorrow’s stages which I’ve rallied on before and really enjoy.”

At the close of play today Norwgian Mads Ostberg and Ford World Rally Team driver Jari-Matti Latvala have both held position in third and fourth respectively.

Ford team-mate Petter Solberg’s blistering time on SS10 – the Monster Street Stage – saw him jump ahead of Ott Tanak in fifth position as the Norwegian begins to fight back after a rough day which saw him pick up three punctures.

“Well we were going really well until we picked up three punctures!” Solberg told Speedcafe.com.

“I think the speed of the Ford now is fantastic and Latvala was also very unlucky and lost a lot of time but we are pushing hard and still two long days to go.”

Nasser Al-Attiyah and Armindo Araujo round out the top-10 with Al-Attiyah taking his first stage win of the 2012 season on SS11 tonight.

Thierry Neuville’s bid for a podium finish on Rally Guanajuato Mexico is over after the Belgian ace crashed his Citroen Junior World Rally Team DS3 WRC midway through the SS6 running in fourth and on a charge. Neuville will restart tomorrow under SupeRally regulations albeit well down the field.

Day 2 is certainly the toughest, with drivers facing a massive 183.30km of competitive action during more than 13 hours behind the wheel. Stages are based closer to Rally HQ in León and includes two passes over the massive 41.88km Otates test.