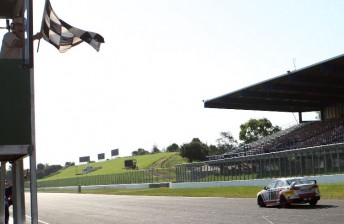 Kostera takes the first chequered flag of the 2012 AMC

The day’s action at the Shannons Nationals presented by Hi-Tec Oils meeting concluded with a one-hour AMC encounter, which the Kostera/Tulloch Mitsubishi Lancer Evo X won by in excess of 15s.

Jim Pollicina drove the race solo in his Evo X to finish second, having briefly led during the pitstop cycle.

David and Dylan Thomas completed the Lancer 1-2-3 in third, while Grant Sherrin (BMW 135i) and Des Wall (Mitsubishi Lancer Evo IX) rounded out the top five.

“I think we had speed up our sleeve today,” said Kostera.

“The car is a lot friendlier on its tyres on the long circuit than on the short which makes life a lot easier.

“It’s been a really positive start and once again the TMR boys have done an outstand job.” Mutson swept both of the day's Radical Cup races

Tony Palmer (Radical Events) finished second in both encounters having led the opening corners of Race 1, while Glyn Edis (Interior Developments) took a pair of thirds.

Simon Haggerty fought with Palmer and Edis over a podium place in Race 2 before a wild spin at the exit of Turn 4 resigned the Haggarty Racing Team driver to a ninth place result.

A 50 minute pitstop race will conclude the racing program for the Radicals at Eastern Creek tomorrow.

Tomorrow’s race one grid will be determined by a ‘chook lotto’ draw to be held later tonight.