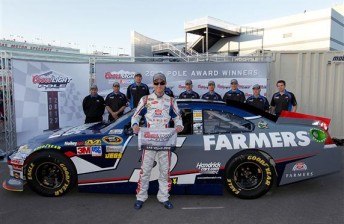 Kasey Kahne will start from pole at Las Vegas

Kasey Kahne has scored his first pole position since joining Hendrick Motorsports at the start of the season with a qualifying lap record at the Kobalt Tools 400 at Las Vegas Motor Speedway.

Kahne signed with Hendrick Motorsports back in 2010, but had to wait until this season to join the team as Mark Martin remained under contract through 2011. Last year he drove for Red Bull Toyota, which closed its doors at the end of the season despite Kahne’s victory at the penultimate race at Phoenix.

Australia’s Marcos Ambrose will start 15th, but will go into the race with plenty of confident after setting the fourth quickest time in practice. The Tasmanian has been fast over the opening two races at Daytona and last week in Phoenix. However, his Daytona 500 hopes were dashed when he was involved in a collision, while last week a certain top-three finish was ended when he had engine failure with 15 laps remaining.