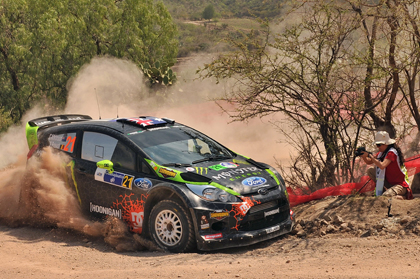 Chris Atkinson in his Ford Fiesta

Speedcafe.com is proud to present Chris Atkinson’s exclusive diary, direct from Rally Mexico. The Monster Energy-backed Ford driver has completed the first day of his World Rally Championship return, winning the last stage of the day.

Below, ‘Atko’ talks about driving for Ken Block’s team, camping in Mexico and living and breathing the ups and downs of rallying …

Hey guys! Thought I might throw a bit of a daily diary your way and what better way than through my favourite motorsport website Speedcafe.com!

Well, it has been the most enjoyable rally ever off the stages, especially when you’re tagged along to all the cool events that Monster put on leading up to Rally Mexico. 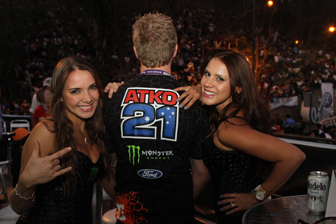 The Monster girls, always a hit with the fans

I went to one of the best PR gigs with the team on Wednesday, which I was thought going to be a meet and greet with the Mayor of the city [Leon] but turned out to be a massive party for KB [Ken Block] and I. We started off doing a few interviews and a photoshoot, before the Mayor and his guards escorted us down to a Monster stage where we had to judge the Monster girls bikini comp! Not a bad gig to kick off the weekend! Before that we had the photoshoot with Ken to unveil my livery, which I think looks absolutely sick!

CLICK HERE for Speedcafe’s previous story on the livery launch.

The way his guys operate is phenomenal and you can see that by the quality of the images and all the amazing social media they do, including the Gymkahana videos. I’m learning a lot from Ken and how to put yourself out there and it’s really fun to have him as a tutor. 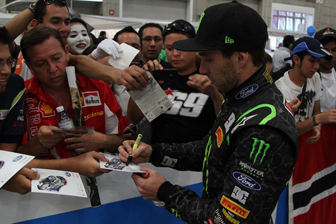 Atko signs a few pieces of memorabilia for the fans

The rally officially kicked off last night in the gold and silver mining town of Guanajuato. This place truly is amazing and it’s one of the greatest starts in the championship. 150,000 people live in this colourful, UNESCO World Heritage listed city and about 100,000 come out for the start.

This year’s start was great because it was the first year we actually got to rally around the town. In the past we had just driven over the start ramp and waved to the crowds before driving 50 minutes back to Service. The unique thing about Guanajuato is that it lies in a valley and to get to it you have to go through this maze of tunnels which were shafted by the Spanish when mining for gold was huge in this area. So naturally, some of the DC Shoes Street Stage went through these tunnels and the sound was incredible! Then at the end of the stage you had a round-about which all drivers had to drift through before crossing the finish line. I bet when Ken threw it in, the crowd was going nuts!

Then this morning, it was down to business and onto the proper gravel stages. Today was fairly new to me and I started off a little conservative then got a puncture which lost us about 40 seconds. It was a bit of a familiarisation session and playing around with set-up to get the car working in sync with my driving style.

When I last drove a World Rally Car, they were 2.0 litre engines and paddle gear shifts. Now, they’re a 1.6 litre and back to the sequential lever for gear changes and the cars are a lot different to what they once were.

We changed the set-up again during the final service and went out to the Leon super special and won it! The car felt much better and the stage win has really given me confidence heading into tomorrow’s stages. I was a bit put off by my times today, so tomorrow we’re putting the heads down and going flat out. We’re not here to make up the numbers.

Well guys it’s a big day tomorrow, 13 hours all up in fact so I’m off to bed but keep tuned to Speedcafe.com for my daily updates and have great weekend.

CLICK HERE for a full recap of Day 1 of Rally Mexico.