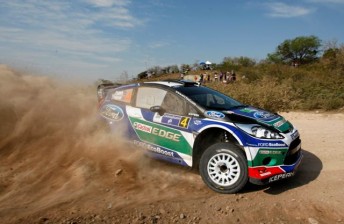 Ford World Rally Team driver Petter Solberg has given himself the best starting position for tomorrow’s opening gravel stage of Rally Mexico by setting the fastest time in the Qualifying test this morning.

Solberg’s blistering run saw the Norwegian 0.9s quicker than Citroen’s Mikko Hirvonen who had the better of teammate Sebastien Loeb. The Frenchman comitted two small but uncharacteristic mistakes over the 5.18km stage and was forced to settle for third.

“Not too bad for an old man hey!” 37-year-old Solberg told Speedcafe.com after the stage.

“I was pushing hard and made no mistakes and now we have chosen to run 15th on the road tomorrow which will help my times a lot as the loose gravel can be quite bad here in Mexico.”

Ford teammate Jari-Matti Latvala set the fourth fastest time with M-Sport driver Evgeny Novikov turning in a solid fifth-quickest pass over the Qualifying test based just outside of Rally HQ in Leon.

Solberg’s fastest time afforded him the first pick of road position for tomorrow’s opening stage and with loose gravel an issue on these fast and technical stages, Solberg unsurprisingly chose to start tomorrow’s event proper from the final road position of 15th. 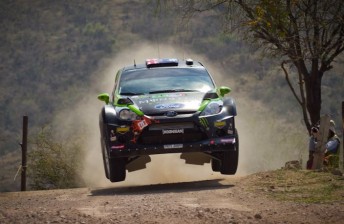 Australia’s Chris Atkinson, driving for the Monster World Rally Team, set the tenth fastest time and as a result will start fifth on the road tomorrow meaning a small bit of road sweeping for the Gold Coaster but not as bad as the opening few World Rally cars.

“I ran wide on the first corner and maybe lost a bit of rythm in there which was probably worth a couple of seconds so could have been looking at a top-5 time all going to plan,” Atko told Speedcafe.com.

“Fifth on the road isn’t perfect but there will be four guys ahead of me sweeping the loose gravel first so it’s not the end of the world.

“This is my first event with the new Superpole style qualifying session and it’s a great concept but having been out of a WR car since 2009 it would have been nice having the old style shakedown here where you can get more kilometres in before the first stage.”

Atkinson’s teammate Ken Block was 11th fastest, some three seconds slower than Atkinson, after hitting a rock and making a small excursion through a fence near the end of the Qualifying stage.