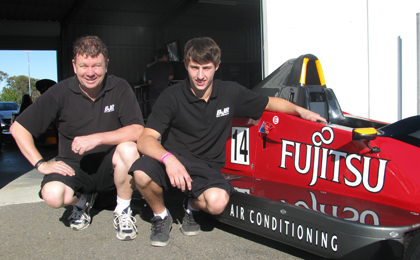 Brad and Macauley Jones at Winton

V8 Supercars team owner Brad Jones will watch from the sidelines as his son Macauley makes his Formula Ford debut this weekend.

Macauley Jones will compete in Round 1 of the Victorian Formula Ford Championship at Winton, ahead of a planned national Formula Ford program in 2012, which kicks off next weekend at Albert Park.

Jones is stepping up to Formula Ford after a successful karting campaign, winning three state titles. He will drive a Brad Jones Racing-prepared Mygale 09 this weekend, before slotting into a Minda Motorsport Mygale 011 for the first round of the Australian Formula Ford Championship at the Australian Grand Prix.

“We’re going to try and do the full national championship with Minda, as well as the Victorian state series and some rounds of the NSW series with our own car,” Jones said.

“We’ve done a lot of testing here at Winton to prepare for this weekend, and I’m excited about racing wheel-to-wheel in Formula Ford against some of the drivers I raced in karts.”