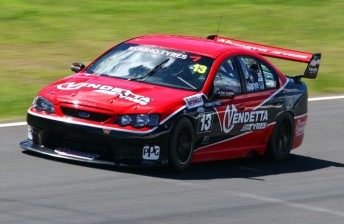 Bobby Jane’s leap from Victorian Superkart racing to the Kumho V8 Touring Car Series got off to a positive start at Eastern Creek Raceway today.

The son of four-time Australian Touring Car Champion Bob Jane was eighth fastest  at the conclusion of three 20 minute practice sessions ahead of the opening round of the series.

Jane, who is driving Terry Wyhoon’s 2011 title winning Ford Falcon BA, said he was pleasantly surprised by his early pace.

“Looking at the lap times, I sort of surprised myself with how far up I was,” he said.

“I thought I would be a bit further behind. It is good to be somewhere up in the middle.

“I am aiming high (for the year). I prefer to aim high, then low. One of my main goals is to be in the top five by the end of the season.”

A tight battle is expected in this year’s Radical Australia Cup presented by MPA Projects, with under 0.5s separating the top three for the majority of practice. Nathan Brumby set the early pace in his DEPUTY Radical Works Team entry, while IMAK-KWIKMIT driver Andrew MacPherson emerged fastest from the second session.

The V8 Commodore Cup National Series was not on track today and will begin its 2012 season tomorrow, with first practice at 9:30am.