Jack’s Doohan it on the kart track

Jack’s Doohan it on the kart track 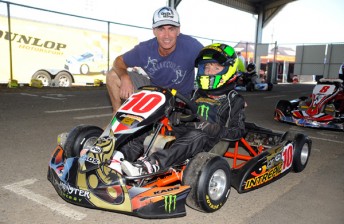 Mick Doohan with his young son Jack on the grid at the Victorian Karting Championships Pic: AF Images

Doohan, 9, is competing against 25 other youngsters in the Cadets category aged between 7 and 11 years old while racing at speeds in excess of 80 km/h around the 758-metre circuit.

With his father by his side as mechanic throughout the day, Doohan was the eighth fastest driver in the opening qualifying session before finishing as the 18th quickest driver overall.

“Jack’s having a great time, and that’s the most important thing right now,” said Doohan Snr.

“This is his first big meeting like this and he’s enjoying not only the racing side of it but having fun with all of the other kids when they’re not racing.

“He was fairly quick in the first session but in the second one he got caught up in a bit of a pack, which dropped him back a bit. This weekend is all about him getting experience against some of the best young drivers from across the country.”

Hurstbridge (Victoria) driver Joshua Smith set the quickest time in the Cadets category ahead of Jai Sparey and Jordyn Sinni.

With 333 entries received for this weekend’s prestigious event, the action will be coming thick and fast across the 14 categories.

In the fastest junior category, Junior Max, it was New South Wales Exprit driver Joseph Burton-Harris who snared pole position on his final flying lap ahead of Jake Dixon.

The racing will continue across the weekend with the championship finals being contested on Sunday.