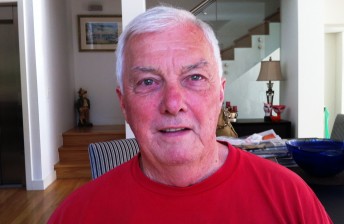 Bill Brown raced during the 1960s when racing drivers were classed as either semi-professional or weekend warriors.

Brown admits that racing was a hobby for him throughout his career, but one that he took seriously nevertheless.

During his career Brown owned and ran newsagencies in Sydney. This was a full time job for him, but one that still allowed him to race on weekends.

He was one of Australia’s more well known amateur drivers, noted for his class win in Bathurst alongside Spencer Martin in 1964 and the crash at the top of Mount Panorama in 1971 – the video of which is still keenly watched more than 40 years after the incident.

For Brown, an interest in cars and racing started early, but he didn’t enter his first race until he was 21.

“I always had an interest in cars, when I first got my licence I bought an Austin Healy but I was never allowed to compete,” Bill Brown told Speedcafe.com

“When I was 21 I said to mum that I really wanted to race and told her that for me it was always a hobby and not a professional thing.

“So she gave me her blessing and I started to race.”

Brown started to race in 1962 and it all began with Porsches at Homebush and Warwick Farm in New South Wales.

“I had a 1600 Super Porsche which I used to drive at Homebush,” said Brown. “I was told that I drove well and was asked if I’d like to have a race and I said ‘Not really but why not’.

“We went to Warwick Farm and I came second in the race and it just went from there.

“I actually remember in those early days, driving a (Porsche) Speedster at Warwick Farm, where I was black flagged for not wearing protective goggles.

“I argued that there was a windscreen, but my opinion fell on deaf ears.”

Being a good friend of Spencer Martin, Brown struck a relationship with David McKay – who used to race and prepare race cars – which led to some endurance drives.

“David asked me to partner Spencer in some four or six hour races driving a Fiat and various other cars,” said Brown.

“Spencer and I did Bathurst in the Vauxhall which we won our class in and when Spencer left to go to Bob Jane I then drove the Ferrari 250 LM for 12 to 18 months.

“My biggest win at the time was the 12-hour race at Surfers Paradise with Greg Cusack.

“The following year, in 1968, I took over the P4 Ferrari when Chris Amon came out here, then I took up driving Porsches.”

Brown was known for racing in endurance events but he also won the Queensland Tourist Trophy and ran in the Toby Lee Series.

While he did much of his racing driving Ferraris and Porsches, he also drove Fords and was part of the original Holden Dealer Team (HDT) to race at Bathurst.

“We went to Lang Lang (Holden’s proving ground) driving the original Monaro 327 around before it was released,” said Brown.

“HDT ran three cars at Bathurst, we were running reasonably well but we sliced a wheel at ‘the Cutting’ which put us out of the race.”

Brown raced several cars at Bathurst, including the Monaro and a Torana, but he had more disappointment there than success Bill Brown won at Bathurst in 1964

Having said that 1964 was Brown’s best year at Bathurst, where teaming up with Martin he won his class.

Back then official line honors went to Bob Jane and George Reynolds, but Brown and Martin won ‘A Class’ in a Vauxhall ahead of his teammates who came second and fourth.

“I was driving for Scuderia Veloce in a Vauxhall Viva and Spencer and I were able to win the class in that race,” said Brown.

“It was exciting, I was fortunate that I knew some people who gave me wonderful support.

“I’ve had some great cars to drive; I was able to equip myself very well.”

Brown drove regularly at Bathurst but they were one-off drives. He used to go to the local dealership for his cars.

“We’d basically get a car for the Bathurst weekend,” said Brown.

“We wouldn’t drive it through the year; we’d drive it up to Bathurst, race and then drive it back.

“You didn’t need too much practice; you should be able to come to grips with a car within 20 laps.” If 1964 was memorable for winning his class at Bathurst, the 1971 event made Brown famous. On lap 43 Brown had one of the biggest accidents in the history of Bathurst, going off the track at the top of the mountain slicing his car in two.

“This incident still gets played 40 years after it happened,” said Brown.

“I was going well, I was looking after the brakes and we were running third.

“We were the quickest private car. There were three works cars and we were the first privateer after them on the grid to start with.

“We knew that we had a tyre problem, the tyre was rubbing.

“I was actually going to pit in a couple of laps, came over the top at McPhillamy went into the corner and it just went straight ahead.

“In those days there was a bank there, I went up into the air onto the bank, there was a wooden fence there in those days, so it caught that and the car rolled down the fence.

“The car rolled down and cut in two. I walked away from it and drove home that evening.”

While he got out of the car and wasn’t  injured the track medics wanted to take him to hospital.

“I went around to have a look at the car and they said they’d take me to hospital, they wanted to put me on a stretcher, but I refused,”  said Brown.

“I thought, actually I won’t tell you what I said; I thought we were in trouble then there was banging and crashing and I was rested upside down.

“The car didn’t have a roll cage as such, I was fortunate though when I came to rest my hat was only grazed on the left hand side, I was pretty lucky.” Brown started the 1971 Bathurst race strongly, but was out by lap 43

What was amazing at the time was that immediately following the accident the race kept running, unlike today when a car pulls over to the side and a safety car enters the track.

“In those days it was a totally different event,” said Brown.

“It was about a group of people getting together to race.

“We’d buy a car off the showroom floor; we bought ours at the local Ford dealer and drove it home after the event. Today cars are purpose built.

“In those days there were four or five classes and we had to contend with the faster and slower cars with a field of over 60 cars.

“It was a totally different race to what it is now, it’s totally professional now.”

While he raced several European cars, Brown also got to race during the era of the first true Australian super cars.

“There were some impressive race cars back then, the XR and the GT-HO and Holden had the Monaro,” said Brown.

“They were petro guzzlers, you look at them today or drive them and they were rough.

“The gear shift, there was nothing very nice about it. Today they are beautiful to drive in comparison to those big brutes of things.”

Brown stopped racing in the mid 1970s, but ran at Bathurst alongside his wife in 1978 before giving it away to concentrate on the business.

He has fond memories of Bathurst in 1964 and of racing several high powered cars, particularly the Ferrari P4, but admits racing throughout his life was very much a hobby.

“Although we were total amateurs we were able to achieve a bit of success,” said Brown.

“I stopped racing to focus on the business and while I haven’t done much racing since I have been invited to drive out at Eastern Creek on a couple of occasions and enjoyed it.

“I’m retired now. I sold my last business, which was a food business, about four years ago.

“Now I just wander around, do some travel with the family and muck around with a couple of cars.”