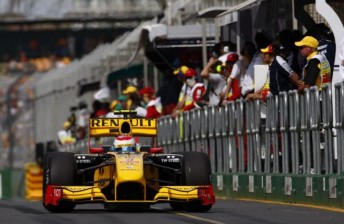 The Renault R30, seen here at the 2010 AGP with Vitaly Petrov at the wheel

The Italian firm has announced that it will complete four to five tyre tests during the season with a Renault R30 (2010).

Pirelli had been without a test car since late last year, when it was decided that the Toyota TF109 (2009) that it had been using was too old to produce meaningful data.

According to Pirelli motorsport manager Paul Hembrey, the test team will have no links to any of the competing Formula One teams.

“Technology as well as the regulations have moved on considerably since then, and the Toyota is no longer able to generate the same sort of forces that we need to simulate in order to meet the current requirements of Formula 1,” said Hembrey of the new car.

“At the top of our agenda is the need to treat the teams entirely equally, which is why the test team will be run independently and all the teams will be able to send an observer to the tests.

“Our new test car will be running to current fuel regulations, with no refueling, so we will be able to simulate a full race distance and the change in balance with the car and tyres.”

Pirelli is expected to announce its official test driver within the next month, ahead of its first 2012 test in May.

The company announced mid-February that it will bring soft and medium compound tyres to the first and third races of the season in Australia and China respectively, while the intervening Malaysian Grand Prix will see the medium and hard tyres.

The 2012 Formula One World Championship kicks off in Melbourne, Australia, on March 16-18.