The 26-year-old Victorian will steer the ex-Micahel Patrizi Carrera Cup machine, with a view to competing in the rest of this year’s championship.

Davison will be a team-mate to his cousin Alex Davison, who won the first round of the season at the Clipsal 500 Adelaide last weekend.

James Davison will drive the #29 car with primary sponsorship from Lease Express.

After trying to secure a ride in IndyCar this year, Davison has returned home, hopeful of scoring a good result at the Australian Grand Prix support race to see where it could lead.

“At this stage, it’s just a one race deal for the Grand Prix, and I’m teaming up with my cousin Alex which is very exciting,” Davison told Speedcafe.com. 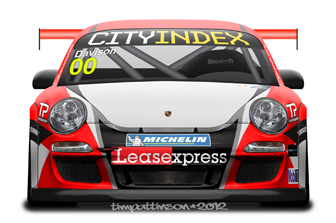 “It’s a unique opportunity. It will be a pretty exciting race, and I look forward to challenge myself against the regulars and the guest drivers. I think it will be an exciting weekend.

“The Grand Prix is a unique opportunity to race against some respected drivers. I’ll be looking to be competitive.”

Davison sampled 30 laps in the ex-Patrizi car at Queensland Raceway recently and hopes that a good result at the Grand Prix will lead to more Porsche racing.

“At the end of the day, it all comes down to sponsorship and results attract interest,” he said.

“My plan is to just do the Grand Prix as a one off, and if everything goes right, then hopefully do more.”

Team owner Andy McElrea says Davison was fast in testing and he is positive that the pair can score a strong result at Albert Park, which may lead to extending their deal.

“We tested him and he was very impressive,” McElrea told Speedcafe.com.

“We’d love to put a deal together for the rest of the season, and that will take a fair bit of work behind the scenes, but we’re all working very hard to achieve that.

“We think that even though James a rookie, he is good enough for a podium against what will be some very intense competition at the Grand Prix.”

James Davison’s presence at the Grand Prix will be special for the Davison family. James will drive in the same team as his cousin Alex, plus his other cousin Will is competing for Ford Performance Racing in the non-points V8 Supercars Championship races.

Alex, Will and James are grandsons of the late Lex Davison – a four-time Australian Grand Prix winner.