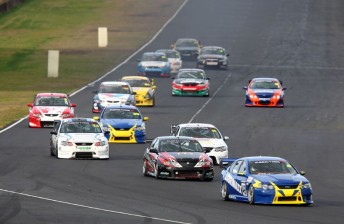 The fields have been set for the five-category Shannons Nationals opener to be held at Eastern Creek Raceway this weekend.

Josh Hunter, the grandson of sprintcar legend Garry Rush, is also set to make his touring car debut this weekend, driving a Falcon for Fernandez Motorsport.

A 20-car field will take to the Sydney venue for the opening Australian Manufacturers Championship round of the season, where Stuart Kostera’s TMR Mitsubishi Lancer is again expected to be dominant.

Last year’s Commodore Cup title combatants Adam Beechey and Matt Hayes will have to contend with the return of former winner Brett Holdsworth as part of a 15 strong field of Holdens, while the Radical Australia Cup and Swift Racing Series have attracted 24 and nine entrants respectively.

Practice for the meeting kicks off tomorrow, while Sunday’s action will be streamed over the internet via the official Shannons Nationals website.

See below for the individual category entry lists