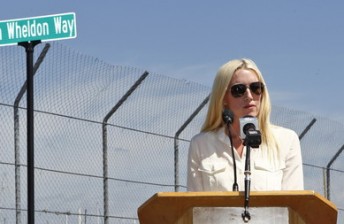 The corner of Bayshore Drive and Albert Whitted Park in St. Petersburg, Florida – or turn 10 of the IZOD IndyCar Series street circuit – has been renamed Dan Wheldon Way.

Wheldon – who was tragically taken in the IZOD IndyCar Series Las Vegas grand final in October – had adopted St. Petersburg as his home town in the USA. Unveiled by his widow Susie and Mayor, Bill Foster, it is a fitting tribute to the twice Indianapolis 500 Champion.

A further permanent memorial will be added close to the site, which will immortalise the winners of the St. Petersburg Street Race. 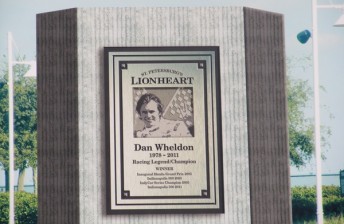 The fallen Champion won the first IndyCar Series race on the streets of St. Pete in 2005 – passing Ryan Briscoe on the final circulation – at turn 10 – to take the win. He then celebrated by jumping into Tampa Bay!

“I want to take this opportunity to thank our St. Petersburg family for all the love and support the past several months,” said Susie Wheldon. “I am so proud and blessed to be able to call St. Petersburg home.

“I want to thank the city, the Honda Grand Prix and American Honda for recognising Dan in such a special way. This is something that we can cherish for years to come. Sebastian and Oliver (Wheldon’s sons) will be proud to know the impact their father had in this community and the world of motorsports.”

Mayor Foster paid his tribute to somebody he called a great citizen of the city:

“I know that Dan adored the personal relationship with each one of (the drivers),” said Foster, who counted Wheldon among the members of the city’s Sports Alliance. “I saw it in his eyes, I saw it in his actions, and he told me so. His City of St. Petersburg, his adopted hometown, loved Dan Wheldon. Not as a driver, which was kind of cool, but we loved Dan Wheldon as a neighbour and somebody we could rely upon to do great things in sports.He was about so much more than racing.”

“A few of us went to dinner last night and were telling stories about Dan, and there are a lot of them,” Franchitti said. “But then you realise he’s not here, and that’s the bad part.”

Wheldon’s image after winning the 2011 Indianapolis 500 adorns the official tickets for this year’s May event.

Earnhardt-Ganassi Racing (EGR) will also honour Wheldon at the Las Vegas Sprint Cup round this weekend with a decal depicting Richard the Lionheart who Wheldon took inspiration from.