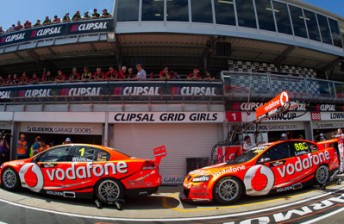 The two TeamVodafone Commodores in the Adelaide pitlane

Triple Eight Race Engineering plans to have nine Car of the Future chassis complete by the start of the 2013 season, and will use three separate workshops in order to meet its target.

The comprehensive build program will see TeamVodafone start the season with two race cars, two spare cars and a ride car, while new vehicles have already been pre-sold to Tekno Autosports (two cars) and Lucas Dumbrell Motorsport (one car).

According to TeamVodafone team manager Adrian Burgess, it has not yet been decided if the planned ninth car will be sold or kept as an additional spare.

The first car, which will be used for the team’s development testing, could be finished as early as mid-June, with plans in place to complete one car per month thereafter in the lead up to the 2013 season.

To tackle its ambitious build program, Triple Eight’s chassis kit provider Pace Innovations has engaged a second Brisbane-based workshop to construct the team’s roll-cages, which are of a standardised design under the COTF rules.

The satellite operation will receive pre-made floorplans from Pace’s Gold Coast facility, before delivering caged chassis back to TeamVodafone’s race shop for completion.

“The reason that we’re using three sites is so that we can have three different jigs working at the same time, allowing us to  keep the flow of chassis and componentry coming at the time that we need it,” Burgess told Speedcafe.com.

“Instead of having one car tying up a jig for its entire build process, we have split it into a couple of different sites so that we can meet our target of a chassis each month.

“There’s a bit of flexibility built into the (one car per month) program, because these things will ebb and flow with the release of information (from V8 Supercars) and updates that we’ll make to the car once we start running.”

Triple Eight Race Engineering has had a heavy involvement in V8 Supercars’ Car of the Future project, most notably through designing the control independent rear suspension and supplying the control pedal box.