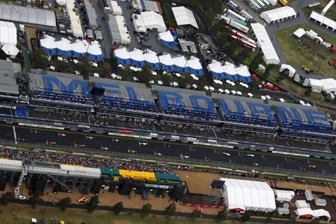 An aerial view of the Australian Grand Prix paddock

Network 10 will take its viewers – racing fans or not – right into the heart of the Formula One paddock at next weekend’s Qantas Formula One Australian Grand Prix.

In a first for FOM (Formula One Management), popular daily programs The Circle, The Project and the 5pm evening news (Sydney and Melbourne only) will be allowed to broadcast live from within the paddock at Albert Park.

Ten will have two sets inside the Qantas Paddock Club – one for its regular F1 coverage, hosted by motorsports expert Greg Rust, plus another set for the news and its other programs.

To emphasis Ten’s major cross-promotion push, special guests from within the F1 paddock are expected to feature on these programs at certain points of their broadcasts.

Ten has also committed to a bumper program for this year’s event. Track action will only be broadcast on its digital platform One on Friday, while Saturday and Sunday’s broadcast will be simulcast live and exclusive on Ten and One into all markets.

“For the first time in FOM history, we have had approval to set up two sets in the Qantas Paddock Club,” Donavon told Speedcafe.com.

“The majority of our hostings will be done from the paddock and we are also crossing into a number of other programs on Ten from there as well including The Circle, The Project and we will be broadcasting live the ten news segments for both Melbourne and Sydney.

“This will be a massive feat and we are really excited about the coverage this year.”

While Ten has a big weekend coming up, there is still no firm decision yet regarding which international broadcast feed it will supply to its Australian viewers.

Ten has the choice of taking either BBC’s coverage, or new broadcaster Sky.

“We still don’t have a decision in regards to what commentary we will be taking,” said Donovan.

“We should know very soon though.”

The Qantas Formula One Australian Grand Prix will be held next week between March 15-18.