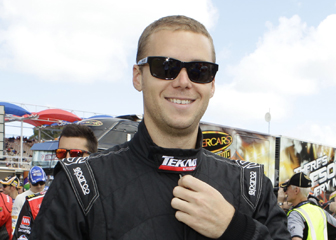 Jonathon Webb experienced the highs and lows of motorsport at the Clipsal 500 last weekend.

After qualifying an impressive fourth in the first race of the year, Webb was delivered a huge blow during Sunday morning’s 20 minute qualifying session. His Commodore VE was struck from behind by Greg Murphy’s Pepsi Max Crew Commodore, putting both cars out of Sunday’s race and leaving their crews a lot of work to do.

Speedcafe.com’s Grant Rowley spoke to Webb about his plans to get to next weekend’s non-championship V8 races at Albert Park.

SPEEDCAFE: The huge Sunday qualifying crash at Adelaide has put a dent in your campaign. What’s the update on the future of your car?

JONATHON WEBB: I don’t know! My chassis went off this morning, and they’ve said a minimum of two weeks to get it sorted. 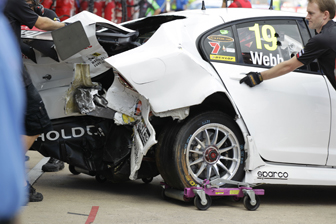 There’s no chance of getting that car back for the Grand Prix. All going well, we’ll get that car back from the panel shop a day or two after we get back from Melbourne. From there, we will spend a busy couple of days getting it ready to head down to Tassie.

Now, we’ve just got to work out what’s available for the Grand Prix, what our options are and what we do. We’re probably not going to know what we’re going to do later this week.

SPEEDCAFE: One of the obvious options is to borrow Triple Eight’s Monster Commodore (that competes in the Dunlop Series). Is that a likely scenario?

WEBB: We’re definitely speaking to Roland (Dane) about what he has got and what’s available. We’re speaking to V8 Supercars too about what options we have available to us as well.

The biggest problem with all of this is timing. There’s only a week until we’re on track. Even the option of getting a car and building it or trying to piece it together, it is certainly tough. We’re not really sure. We’re talking to everyone and weight up our options.

SPEEDCAFE: You must be disappointed, given that you’d qualified on the second row of the grid for the first race of the year …

WEBB: You’re right. We were over the moon, and I think we deserved it. It wasn’t something we fluked.

I’d been working hard on getting my driving up to scratch. The boys worked hard and worked mega hours to give me a car that was 110 percent.

We knew what we wanted to do, and we did exactly what we planned. It was disappointing that we couldn’t finish the weekend off.

SPEEDCAFE: And your speed wasn’t the only encouraging thing. Your new team-mate Michael Patrizi scored two good results and he sits 14th in the title …

WEBB: I’m over the moon for Michael. There were a lot of sceptics out there about how and why we got Michael for our team. Everyone believed that it was a money thing, but from us, it purely wasn’t. That’s pretty much what we told everyone who approached us (about the drive). It wasn’t pure dollars that was going to get the drive. We’ve invested a lot of time and money in the team, and just to take a driver on the pure dollar factor didn’t make any sense.

I think we’ve proved that we made the right decision. We chose Michael because he has the ability. I’m over the moon that he has gone out and shown his ability – given the right opportunity.

SPEEDCAFE: The speed of your two cars was one of the standouts over the week. The other aspect that stood out was that they were both plain, matching white. What the update on your sponsorship?

WEBB: We’re still working away. Even though the weekend didn’t finish the way we wanted, it definitely got us noticed. It definitely showed potential sponsors that we’re out there, we’re keen, we’re putting on a good show with competitive cars. Looking at that side, the feedback that we’ve got has been really positive.

That doesn’t mean that something is going to happen overnight, either.

SPEEDCAFE: Do you think you’ll go to the Grand Prix with plain cars again?

WEBB: We’re trying extremely hard not to. In saying that, we’ve worked flat out since the start of the year not to have white cars. Until a deal is done, we just won’t know, but we’re doing everything possible to try and achieve the goal.

SPEEDCAFE: You’d said you’d worked hard on your driving over the off-season. You’ve got a strong team around you, very good cars and now a fast team-mate – has it changed your expectation for the season?

WEBB: Going into the year, I had high expectations. I probably said earlier that my aim was to finish as many races in the top 10 as I could. That would naturally give us a top 10 championship result, and nothing has changed with that. We’ve got confidence now and the fact that we know we can run top five when everything goes well.

We’re sticking with Plan A – finish in the top 10 or top five.

As poorly as it looks at the moment (Webb sits 24th in the championship), people have done it before, turned it around and I’m confident that we can do exactly what we planned and finish in the top 10.