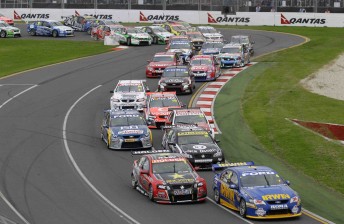 V8 Supercars drivers racing at the back of the field in Friday’s qualifying race at the Australian Grand Prix will be forced to return to pit lane.

In a first for V8 Supercars, Friday’s race at the Albert Park street track will see the drivers at the tail of the field during the 13 lap race summonsed to pit lane.

Thursday’s track action will feature two practice sessions and a twilight qualifying session. The qualifying order will determine the starting slots for Race 1 (to be known as a Qualifying Race) on Friday morning.

After the completion of the third lap, the cars in 28th, 27th, and 26th will be in the ‘drop out zone’ and will return to the pit lane and are out of the race.

After the completion of the fourth lap, the cars in 25th, 24th, and 23rd will be in the ‘drop out zone’ and return to pits.

Every lap until Lap 8 will see another three cars drop out until the final 10 cars continue to the end of the race.

Below a summary of the lap number and positions in the ‘drop out zone’ and when cars are to return to the Pit Lane.

After the qualifying race, V8 Supercars will feature on track across three more sprint races, to be known as Race 2, Race 3 and Race 4.

For Sunday’s Race 4 will see the cars start in positions based on the points accumulated across Races 2 and 3.