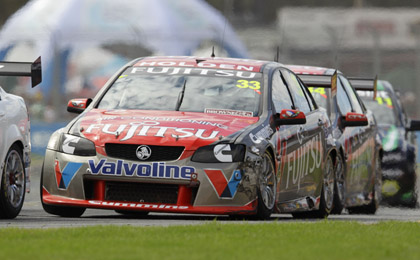 French V8 import Alexandre Premat says that he is impressed with the level of respect shown between Australia’s V8 Supercars drivers.

Garry Rogers Motorsport’s new signing made a solid, if unspectacular, debut at the weekend’s Clipsal 500, finishing both races inside the top 20.

He currently sits 18th in the V8 Supercars Championship.

According to the former DTM, sportscar and open-wheel ace, one of the standout features of the V8 class is its outstanding sportsmanship.

“In Europe, they are not fair, especially in qualifying. I see in Australia that there is a real respect for drivers which we don’t have in Europe. “In Sunday’s race, I was quite fair. I left room for (Jamie) Whincup, Craig (Lowndes) and others. I knew it was important for the race.”

For more with Premat, the V8 rookie spoke to Speedcafe.com’s Grant Rowley for a brief chat …

SPEEDCAFE: To complete both races in Adelaide, without damage, must be a great feeling …

ALEXANDRE PREMAT: It was a really quick weekend! It has only been one month since I signed the contract to come drive here, so it has gone really quick.

We’ve finished the first race now. I’m happy to have finished because I need more mileage, more driving because I still do not understand the brakes and the set-up. We went through a lot of things this weekend with Richard (Hollway, GRM’s engineer). We solved many problems, and I think from Melbourne, we will start to look at many options.

It’s good. I finished 17th and 18th. Of course, I want to be in a better position, but the race is really tough on the drivers. These drivers have been here a long time in V8 Supercars – they know the track, know the car. I need time to improve.

If you look at the lap times, I was always improving, session after session, lap after lap. I think it was good. I didn’t make mistake, I didn’t crash the car, especially in Adelaide where the track is quite hard. I saw drivers with much more experience crash cars!

SPEEDCAFE: Is V8 Supercars what you expected?

PREMAT: I was expecting to do the best I could do. I think I’m not really happy, because I made a few mistakes, and I lost some times, definitely. Maybe I lost about 20 seconds in the whole race.

I’m happy to have finished, scored points, and I finished twice in front of Michael (Caruso), even if he had problems. It is already a good start.

SPEEDCAFE: The Clipsal 500 is one of the toughest motor races on the drivers. From a physical standpoint, how did you cope?

PREMAT: Physically, I was top fit. I did not sweat. For me, it was fairly easy compared to sportscar and DTM. That was encouraging for me to go through the 78 laps.

I’m fit and I don’t see thing being a problem for me for the rest of the season.

SPEEDCAFE: So now that you have completed your first race meeting in a V8 Supercar, what are you overall impressions of the whole V8 Supercars show?

PREMET: My impression of the show is that it’s great. If I have to compare an event to Adelaide, it’s like the 24 Hour of Le Mans. It’s a full crowd, many fans, all the people have their heart on their hand and they speak to you. It’s really cool, very friendly, I like this kind of atmosphere.

SPEEDCAFE: And what about your rivals? How did you find them?

PREMAT: They were quite good with me. I had a small contact with one of the drivers in Race 1 (Karl Reindler). He came to me and I said “sorry.” I overshot my braking, then he touched me again and he bent his suspension.

I think, with the drivers, I don’t know many of them and I need to talk to them. I don’t think it will be a problem.

In Sunday’s race, I was quite fair. I left room for (Jamie) Whincup, Craig (Lowndes) and others. I knew it was important for the race.

Compared to Europe, the drivers are really very fair. In Europe, they are not fair, especially in qualifying. I see in Australia that there is a real respect for drivers which we don’t have in Europe.