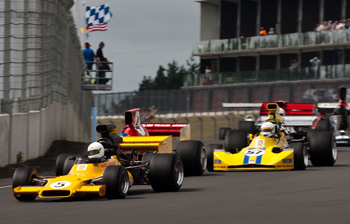 Over 500 cars will descend on Australia’s most picturesque race circuit for the annual Phillip Island Classic this weekend.

A full program of races will be held on Saturday and Sunday, where fans of historic motor racing will be able to witness some of the great cars of yesteryear.

Historic Formula One fans will also be able to see and get up close to one of the most famous Ferraris of all time – the Tipo 500 in which Alberto Ascari claimed Maranello’s first World Championship, in 1952.

Fred and Christine Gibson are joint patrons of the 2012 event, while Jim Richards and John Bowe head the list of the great names who will be seen at the wheel of famous cars from their past.

The Formula 5000s will act as the lead on-track categories, with series MSA F5000 Series leader Steve Ross heading a large Kiwi contingent set to take on the locals.

A full grid of 28 F5000s are expected to contest the final round of the mainly NZ-based series, which will also comprise the opening round of the 2012 Australian Formula 5000 Cup.

Such has been Ross’ consistent pace and string of top three results – including a comprehensive win at the preceding round in Christchurch – that a result in any of the weekend’s qualifying heats should sew up the 2011/12 title. Ross will drive his familiar yellow McRae GM1-Chevrolet.

The Formula 5000s will contest two qualifying races on Saturday, followed by a third heat and a feature race on Sunday.

Besides the on track action, around 500 special vehicles from 43 clubs will be on display around the circuit on the Sunday, while 300 will also in attendance on the Saturday of the three-day meeting.

Additionally there is a group of 40 Torana XU-1s celebrating Peter Brock’s historic first Bathurst victory 40 years ago in 1972.