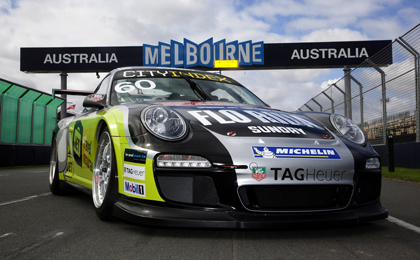 Here are the first images of the car that Heinz Harald Frentzen will drive in the Porsche City Index Carrera Cup at the Qantas Formula One Australian Grand Prix next weekend.

Frentzen will drive the guest car, prepared by the Porsche Centre Melbourne.

CLICK HERE for Speedcafe.com’s initial story on the former Grand Prix driver’s debut in the category.

“Being one of the biggest names in music at the moment, it’s great to see Flo Rida on board with major signage on our Carrera Cup Guest car at Albert Park,“ said Blaikie.

“Heinz-Harald Frentzen is a massive drawcard for the category, and having Flo Rida involved in the championship is now a greater incentive to people to follow the on-track Porsche action.”

Carrera Cup is one of five support categories at the Australian Grand Prix, supporting the opening round of the Formula One World Championship. The four day event will be held from March 15-18.