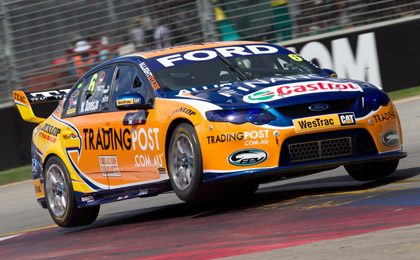 Davison took the lead from Garth Tander late in the second stint in a move that also saw the Orrcon Falcon sneak into second place.

Tander led early after a strong start, before Whincup took over the front-running eight laps in.

Whincup’s race would take a turn for the worse early in the second stint, where an engine misfire forced the TeamVodafone Commodore to let Tander, Davison and Winterbottom through. Whincup eventually finished 21s down on race winner Davison in fourth.

Craig Lowndes also lacked pace in the second half of the race as he conserved fuel, eventually finishing fifth. Yesterday’s pole sitter did well to make it home on just two stops having been switched from a three-stopper following Whincup’s issue.

It was a tough afternoon for Jack Daniel’s Racing, with Rick Kelly 11th after being forced to pit for a splash of fuel on Lap 76 of 78 while running seventh. Team-mate Todd Kelly fared even worse in 23rd after losing time with a jammed left-rear wheel nut in his second stop that saw a single left-rear tyre complete a total of three stints on car #7.

Michael Caruso also suffered an early delay with a spin at Turn 4 on the opening lap, eventually finishing one place ahead of Todd Kelly in 22nd.

David Wall was an equally disappointed 21st, having had a late drive-through penalty for kerb hopping withdrawn while he was serving it.

James Courtney was the last of the finishes in 25th having lost 13 laps with a repeat of the tailshaft failure he suffered in qualifying this morning.

James Moffat was the only non-finisher after suffering power steering issues, while Jonathon Webb and Greg Murphy failed to take the start after an accident in qualifying.

Will Davison now leads the 2012 championship by 18 points from Jamie Whincup, with Garth Tander, Mark Winterbottom and Craig Lowndes rounding out the top five.

See below for a highlights package of today’s race