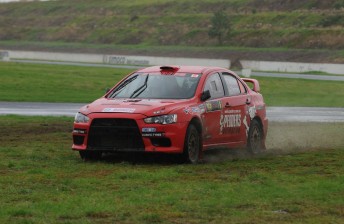 Tom Wilde in a Mitsubishi Evo 10 has clinched his first ever round win in the Australian Rally Championship with victory at the opening round of the Four Wheel Drive Championship at Rally Calder near Melbourne.

Honda and its lead driver Eli Evans celebrated their maiden ARC round win with victory in the Two Wheel Drive Championship.

Wilde heads to his home round in Western Australia as the leader of the Bosch Australian Four Wheel Drive Championship after a dramatic conclusion to the rally which saw him win the final stage of the weekend to take the victory.

A small mistake and a spin on Friday saw Wilde slip to fourth but then he was able to fight back to take second in heat two on Saturday and pip Queensland Mitsubishi driver Steven Shepheard on the final stage for the victory.

“We didn’t think we’d get the win all the way through the rally, even after the last stage we didn’t know if we were on the podium or not,” said Wilde.

“To find out that we won was the best feeling ever.

“It was a fun but very technically challenging event, one error and your rally was over.

“That’s why it was so much of a see-saw battle, if you had a bad stage and you’d be back to third or fourth and that made it exciting even more.

A broken driveshaft midway through the final robbed Shepheard in his Mitsubishi of a near certain victory and the Queenslander dropped to fourth, while West Australian Nathan Box in a Mitsubishi Lancer Evo 9 took an amazing second at his first ever attempt at a round of the Bosch ARC.

Behind them NSW Mitsubishi driver Michael Boaden snuck into third overall for the round with a win in the final heat also winning the final ‘power stage’, scoring bonus points and bumping Shepheard from the podium.

It was smiles all around in the Honda compound in the service park with the Japanese manufacturer celebrating its first ever round win in the Bosch ARC after two years in the championship. Its lead driver Eli Evans was rewarded for his level headed approach and his persistence over the past two years.

South Australian Nissan driver Jack Monkhouse was unable to chase down Eli Evans in the Two Wheel Drive Championship. Evans led for almost the entire weekend and won the round with a clean sweep of all three heats.

“A win in the Honda Jazz G2 is on its first outing is what we built the car to do,” said Evans.

“We designed the car to win and that’s what it’s done – so that’s a bit of weight off the shoulders. Mark Pedder, driving the second Honda works car fought back in heat three to take second for the day but a mechanical problem on heat two meant he narrowly missed making the podium.

In the Australian Classic Rally Challenge, pace setter Neal Bates continued his dominance in his newly completed 1980 Toyota Team Europe Celica taking the round win ahead of Porsche driver Jeff David who claimed second position while Dave Thompson in a Triumph TR8 rounded out the podium positions.

The day was marred by an enormous accident in the day’s opening stage. Ivan Thompson lost control of his Aston Martin V8 Vantage and hurtled towards a concrete barrier at 160 km/h. The left side of the car was torn apart as he hit the wall at 33Gs.

Thompson was able to get out of the car unassisted while co-driver Karl Francis escaped with just a dislocated knee.

Three times Australian Rally Champion Cody Crocker took the honours in the inaugural Side by Side Rally Challenge ahead of Tamworth driver Iain Hughes in second and Sydney’s Nathan Chivers in third as Polaris dominated the podium.

Check out the video of the Aston Martin crash