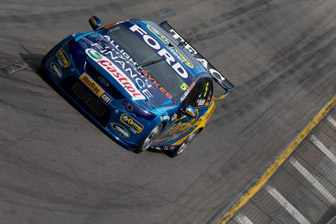 Mark Winterbottom was left to lament lapped traffic after finishing second to team-mate Will Davison in today’s second leg of the Clipsal 500.

Winterbottom ran third in the early laps, but lost the position to Davison after pitting one lap later than the Trading Post Falcon.

The Orrcon entry followed Davison past both Jamie Whincup and Garth Tander in the second stint, before car #6 emerged from the second and final stops with a four second margin that could not be bridged.

“Will pitted a lap before me, and I got stuck behind lap cars on the in-lap, which cost me around three seconds,” explained Winterbottom of the first stops.

“I had quite a bad out-lap with cars as well, so all up there was about four seconds there.

“Will put a good move on Garth and nudged him a bit wide for me (in the second stint), so I got through, and then followed him for a lot of laps. I was on setting three on the fuel switch just trying to save fuel, and then he pitted a lap before me again as I had one lap in hand on fuel.

“(Then after my second stop) I had Ingall come out of the pits on cold tyres into Turn 1 and I lost two seconds again.

“At the end of the day he (Davison) had four seconds when I came out of the pits (for the last stint) and we just ran around like that.

“There was nothing in it, but four seconds is four seconds, and he didn’t make a mistake, he just kept trucking along and I couldn’t do much about it.”

Winterbottom paid tribute to his team for the result, noting the work that had been undertaken overnight to repair the team’s third entry, driven by David Reynolds.

Reynolds bounced back from his Turn 8 crash yesterday to round out his first weekend with the team in seventh.

“We knew that we’d start the year well, but it’s never guaranteed that you’ll get a result, let alone a whole team result,” said Winterbottom.

“It’s a really big effort by the boys. They worked on Reynolds’ car last night until 2am, and then turned up today and did ripper pitstops off about three hours sleep.

“When you finish one-two it doesn’t get much better, so it was a really good performance.”