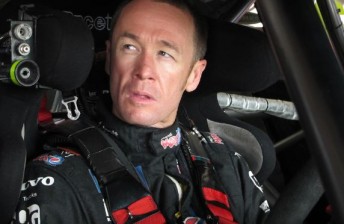 Greg Murphy has called for longer qualifying sessions following the accident that has rendered him a non-starter for Race 2 of the 2012 championship in Adelaide.

Murphy had been the first driver out of pitlane following an early red flag period, but came across an almost stationary Jonathon Webb at the completion of his first hot lap.

The two Commodores made heavy nose-to-tail contact at the exit of the blind Turn 14, ruling both cars out of today’s race.

CLICK HERE for Speedcafe.com’s news story on the withdrawal of car #51

In describing the incident, a dejected Murphy emphasised that congestion in the 20 minute qualifying sessions is not a new issue.

“It happens just about every meeting in qualifying, the front cars come around to finish a lap while the last haven’t even started, and that’s what happens,” said Murphy.

“I’d hope that by the second run that everyone would have been pushing a bit more out the gate.

“I got to Turn 12 and saw Michael Patrizi, who saw me coming and let me go, and then I got onto the kerb in the second last corner and came across Jono (Webb), who had another car ahead of him (Mark Winterbottom) and had nowhere to go.”

While qualifying etiquette has been repeatedly brought up in drivers’ briefings in recent years, Murphy suggests that simply lengthening the sessions will alleviate the issue.

“I think the session needs to be longer so that no everyone has to be on track at the same time,” he said.

“We’d already had a red flag so there was only 14 minutes to go, and there was a lot of running still to be done.

“Everyone is trying to get a gap and get a clean run and there’s not a lot of time, so it’s all a bit of a panic.

“The problem is some guys go out the gate and charge past everybody, and then end up holding everybody up when they get to the front.

“It’s a real mess. There’s a lot of guys just dawdling around on their out lap. They’re never going to do a time on their first lap because they’re just going way to slowly to warm their tyres up. I just don’t see the point in it.”

When asked of his physical condition following the collision, Murphy lamented the amount of work needing to be taken out on car #51 prior to the non-championship Australian Grand Prix meeting in two weeks time.

“I’ve got a bit of a sore neck, but it’s more the car and our guys that have suffered,” he said.