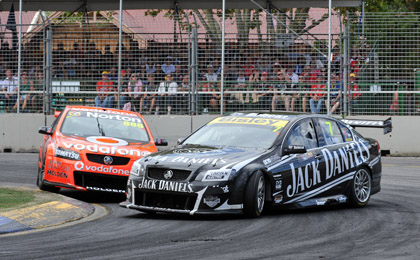 Craig Lowndes has been penalised for contact with Todd Kelly in yesterday’s first V8 Supercars Championship race of the season.

Lowndes, who started the race from pole in his #888 TeamVodafone Commodore, had been forced to fight his way through the field in the closing stages due to a midrace puncture.

Kelly was running in sixth position on Lap 76 of 78 when a touch from Lowndes at the Turn 9 hairpin spun the Jack Daniel’s Commodore – allowing Lowndes, Fabian Coulthard and Rick Kelly to file past.

Lowndes will retain his fourth place finish but has copped a 25 point penalty for his actions. The result drops Lowndes to seventh place in the championship.

All 28 cars are expected to take to the circuit for qualifying, following lengthy repairs to the four cars damaged at Turn 8 yesterday.

James Courtney, Taz Douglas and Jason Bright all found the wall in the early laps, while David Reynolds, who had been driving without a working cool suit, endured a similar accident with 33 remaining.