All eyes on updated Red Bull at Barcelona

All eyes on updated Red Bull at Barcelona 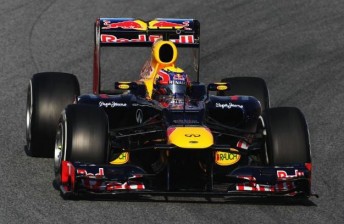 Mark Webber in the updated RB8

Sergio Perez may have topped the times at the end of the third day at Barcelona, but it was an updated Red Bull RB8 that commanded the bulk of the attention.

Mark Webber was entrusted with giving the upgrade package it first laps – a new exhaust layout and front wing design the most notable changes.

The Australian ended the day just eighth fastest however, as mid-afternoon rain scuppered any chances of late improvements.

Perez had set his best lap of 1:22.09s while running on soft tyres during the morning, while Jenson Button used the medium tyres to finish the day just 0.009s adrift in the McLaren.

While admitting that Red Bull will bring further updates for the final day, Webber told media at the circuit that he expects a very competitive field at the Australian Grand Prix in two weeks time.

“Everyone today was in the 1m22s so that is not hanging around at Barcelona these days,” said Webber.

“So there are a lot of quick teams, a lot of fast cars and we need to continue to work hard.

“People can talk all they want about us but until we are at the top of the timesheets we have work to do. So there is still a long way to go.”

See below for the full Day 3 times