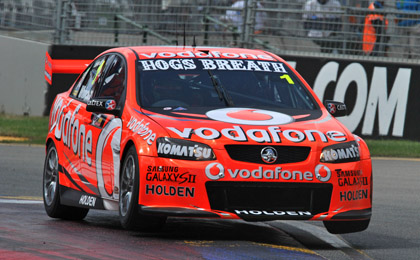 A Safety Car period with 33 laps to go set up the dramatic finish, with Davison among many attempting to make it home without a final stop.

While the majority pitted over the closing laps, Davison stayed out in the lead of the race, before eventually being passed by Whincup at Turn 9 on the final lap.

Garth Tander was third having led Davison before making his final stop, while Craig Lowndes recovered from a midrace puncture to finish fourth.

The race was marred by two big accidents at Turn 8, with James Courtney, Taz Douglas and Jason Bright all crashing out at the sweeper on Lap 5. The incident was triggered by a failure on Courtney’s car.

CLICK HERE for comments from James Courtney after the incident

FPR’s new recruit David Reynolds also found the wall at the same corner later in the day, resulting in the race-defining Safety Car.

Whincup had gone off-sequence early in the race by completing a short first stint, and pitted for the second time five laps before the crucial Safety Car.

Whincup then put in a storming third stint, repeatedly resetting the lap record as he pulled a 12s lead over the pursuing Garth Tander and Davison.

Making his final stop with 12 laps remaining, Whincup went faster again as he hunted down the leaders, eventually leaving the lap record at 1:21.05s.

Tander had led the early laps, but was soon overhauled by pole-sitter Lowndes. The Toll HRT Commodore brushed the Turn 8 exit wall soon after, and was lucky to escape without notable damage.

Jonathon Webb was the hard luck story of the race, with the Tekno Autosports drive backing up his fourth placed qualifying position by running inside the top 10 for the majority of the day. Late-race damage saw the #19 Commodore in for a lengthy pitstop, before eventually being classified 23rd.

Michael Caruso fared little better in 22nd after and early puncture, while Greg Murphy was 24th after breaking a damper midrace.