Rain and mud at Rally Calder

Rain and mud at Rally Calder 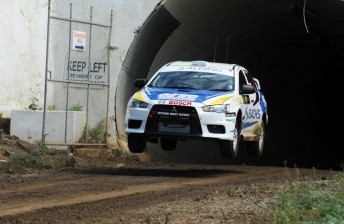 Steve Shepheard on the jump at Calder

Victorian Nicholas Box in a Mitsubiishi Evo 9 has leapt from fourth into the lead  in the Four-Wheel-Drive Bosch Australian Rally Championship opener at Rally Calder in Melbourne mid way through  day two of the three day  rally in front of a building Calder Park crowd.

The  Two-Wheel-Drive Bosch ARC has also been shaken up on the opening stages of the day with the two works Honda Jazz’s of Eli Evans and Mark Pedder i slipping to second and third respectively behind Jack Monkhouse in the r spectacular ear wheel drive Nissan Sylvia S15.

Can Am has struck back in the Side by Side Rally Challenge with Michael Guest and David Green taking advantage of  problems for Cody Crocker which has seen  his Polaris slip back to fourth behind  Nathan Chivers  in second with 27 year old James Shipp in third.

In the fight for the Rallyschool.com.au Australian Junior Challenge,  Yarra Valley driver Dane Berry is ahead  of James Rodda in the four wheel drives while Adrian Coppin leads the two wheel drives in his Ford Fiesta.