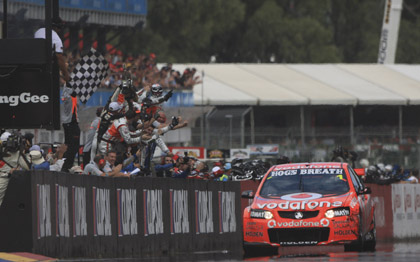 Jamie Whincup has described today’s opening leg of the Clipsal 500 Adelaide as the best race he has ever been involved in.

The TeamVodafone driver took the lead from Will Davison on the final lap as the Ford Performance Racing driver ran low on fuel.

The victory comes less than one week after the passing of his father David Whincup, who had endured a short battle with cancer.

Whincup was forced to complete an unfancied three-stop strategy in today’s race in order to run off-sequence with his pole-sitting team-mate Craig Lowndes.

Whincup benefited from a Safety Car period with just 33 laps to go, which heavily compromised those running the conventional two-stop strategy.

“The three stop strategy never works, and I knew that at the start,” said Whincup.

“I was working really hard to get up to Craig to battle him for position. It was a tough start to the race but then we built momentum.

“Anyone that understands motorsport knows that you need everything to go right to have a result like that, and everything just turned my way today.

“I never like to make bold statements at the time, but I believe that’s the best race I’ve ever been involved in.”

Asked about the difficulty of focussing on today’s race following his recent loss, Whincup gave a pointed response.

“I’m one of 48 people at TeamVodafone and I pride myself on making sure that I don’t bring my personal issues to work,” said Whincup.

“I go about my business and I owe it to the other guys every time I go out there.”