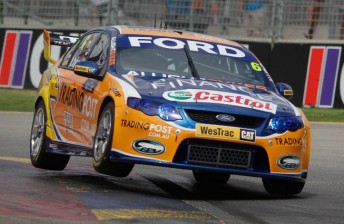 Will Davison was fastest in the morning warm-up

The stage is set for the opening race of the 2012 V8 Supercars Championship following the completion of this morning’s 20 minute warm-up session.

Will Davison emerged with the fastest time – his 1:22.16s best almost 1s afrift of Craig Lowndes’ pole effort from yesterday.

Jamie Whincup was sixth fastest, despite making side-on contact with the Turn 8 exit fence mid-session. The TeamVodafone driver had been closely following Jason Bright’s BOC Commodore at the time of the impact, and was able to continue to turn laps without reporting to the pits.

The session featured one red flag period, with Frenchman Alexandre Premat nosing his Fujitsu Racing GRM Commodore into the Turn 11 tyre barrier at the halfway mark.

This morning’s session is the only warm-up on the 2012 V8 Supercars Championship schedule outside of the Sandown and Bathurst endurance races. Unlike yesterday’s qualifying and top 10 shootout sessions, teams were allowed to use pre-marked tyres in the warm-up.

Davison said that the warm-up performance has his FPR crew more confident than ever.

“It’s been a good weekend for FPR so far, I think we’ve topped every session so far except the important one in the shootout,” he said.

“In the warm-up I ran full fuel and old practice tyres and we ended up on top again, so it bodes well for a big race.”

Davison added that an unknown heading into the race is the condition of his back, which has niggled the 2009 Bathurst winner during races for some time.

“Hopefully it’s better, I won’t say it’s perfect, but I don’t usually know these things until I get about 30 laps into the race,” said Davison the issue.

“I’ll just grin and bear it, throw a few pain killers down and she’ll be fine.”