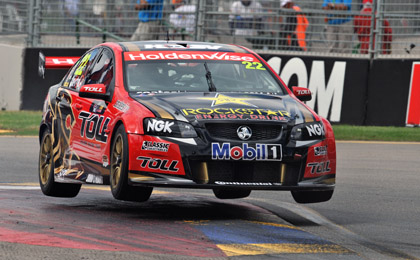 James Courtney before his accident today

James Courtney has told the story of his huge crash during the opening stages of the Clipsal 500, Adelaide.

The Toll Holden Racing Team driver appeared to have a failure approaching Turn 8 on Lap 5, sending the #22 Commodore into the wall.

Courtney’s incident was soon followed by two more accidents, with Taz Douglas and Jason Bright both falling foul of fluid from Courtney’s car on the circuit.

The failure on Courtney’s car could be related to a first lap contact with Douglas and Greg Murphy.

Courtney says that it was the biggest accident he has had in a V8 Supercar.

“My start was typical, we got touched in the right rear, pushed wide, lost some places, but no real issue,” he told Speedcafe.com.

“A few laps later, I was coming back through, catching back up, and I think something has broken coming into Turn 8. All of a sudden, the car had a massive snap, opposite lock and slammed the wall massively hard.

“It was a huge hit, probably the biggest one I’ve had. It was very unusual the way it happened.

“There was a heap of oil blown up the side of my car, so that may be related. Something broke and all the oil came fly off.”

Courtney is unsure at this stage if the car will be repaired for tomorrow’s second race.

“It’s a big hit and the boys will have a proper look at it tonight,” he said.