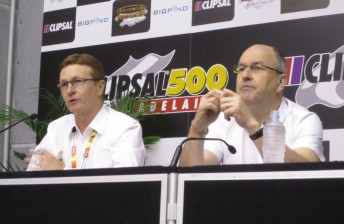 V8 Supercars chairman Tony Cochrane says that the November TBA slot on the 2012 V8 Supercars Championship calendar is unlikely to be filled by an Australian event.

The category continues to work on secure an overseas location for the 14th and penultimate event of the season.

Cochrane told media at a press conference in Adelaide this morning that, with no compulsion to run a full 15 event calendar, the TBA slot is likely to be abandoned altogether if its overseas plans fail to materialise.

“No team, to my knowledge, including V8 Supercars itself, has sold more than 14 events as a part of their platform, so any event above that is a bonus structure,” said Cochrane.

“(Adding an Australian event is) possible, but it’s fairly difficult to do that at that time of the year.

“So my gut feeling – that’s all it is – if it (an international event) didn’t come off, we’d probably just remove that round from the championship.”

The TBA slot has been the subject of rampant speculation since the 2012 calendar was announced last October.

While the new Indian Grand Prix circuit, a return to Bahrain, and several locations in South East Asia  have all been rumoured in recent times, Cochrane says nothing will be made official until at least the end of the month.

“We said that when we announced that calendar last year that we would make an announcement about the November date towards the end of March this year. I still see that being the case,” said Cochrane.

“It is reasonable to say that it is very much a work in progress, and does have some very interesting aspects to it which we are trying to work through and get resolved in time.

“I would expect to break cover on that decision by the end of this month, maybe very early April.”

The 2012 V8 Supercars Championship kicks off today at the Clipsal 500 in Adelaide.