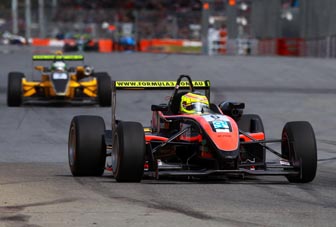 A total of 62,700 fans converged on the Clipsal 500 Adelaide circuit for the second day of the famous event.

With a total of eight categories, there was plenty to see and do at the street circuit.

CLICK HERE for Speedcafe.com’s report on the V8 Supercars top 10 shoot out.

CLICK HERE for Speedcafe.com’s race report from the Dunlop Series.

In the other classes, James Winslow won the opening race of the 2012 Formula 3 Australian Drivers Championship and, in doing so, raced into the record books.

Andrew Fisher won the first Auto One V8 Utes Series race of the year, which was also the first win for the FG Falcon in the category.

Pole-sitter David Sieders lead until an electrical drama halted his progress, allowing Ryal Harris to lead, before Fisher took the lead between turns seven and eight.

Rhys McNally was third from Kris Walton and Cameron McConville, although that result is under investigation by the stewards.

And in the only category that did not hold a race, Australian GT conducted its qualifying session, with Greg Crick’s Viper took pole position.

Track action resumes tomorrow with all categories on track ahead the V8 Supercars Championship first race of 2012 at 2.35pm (local time).