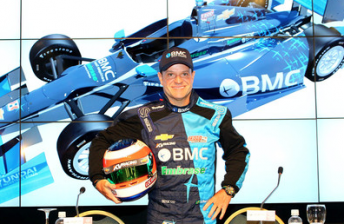 Rubens Barrichello has confirmed that he will join the IZOD IndyCar Series this year.

After 19 consecutive years as a Formula One driver, the Brazilian will team-up with compatriot and friend Tony Kanaan at KV Racing Technology and will make his debut in the series later this month at St Petersburg, Florida.

E.J. Viso will be the team’s third driver.

Barrichello, 39, says he is not setting any high expectations for his IndyCar debut.

“I’m very competitive and I’m not doing this just for fun, but I’ll keep my feet on the ground in the beginning because I’ll be a rookie despite of all my previous racing experience,” Barrichello said.

Barrichello had previously stated that he would not race in ovals due to safety concerns, but his family convinced him to reverse his position.

“I had always promised to my wife, Silvana, that I wouldn’t race on ovals,” Barrichello said.

“But we talked a lot and in the end she said that she wouldn’t interfere if this was really what I wanted to do. I think my two sons were actually the ones who helped convince her.”

Check out the Foxsports News story