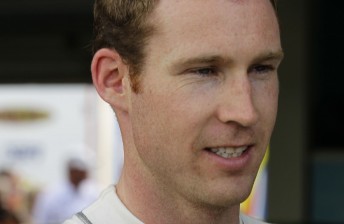 David Reynolds has topped the first session of the 2012 V8 Supercars Championship.

The Bottle-O Racing Falcon driver edged out Jonathon Webb on his final lap, setting a time of 1m23.0067s.

This morning’s first and second practice sessions are for the bottom 50 percent of the field, based on last year’s V8 Supercars Championship. Rookies are also permitted into the two 30 minute sessions.

Fujitsu Racing’s new French signing Alexandre Premet brought out the red flag out after 16 minutes after a spin and stall.

The V8 Supercars will hold another three practice sessions today, followed by qualifying and the top 10 shootout.