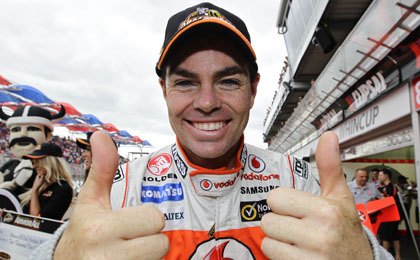 Lowndes was the ninth driver on the circuit in the top 10 shootout, and moved to the top of the order by completing a 1:21.27s lap that proved 0.29s quicker than previous fast man Garth Tander.

Tander will start second, with Will Davison and Jonathon Webb sharing the second row.

Webb was arguably the star of the session after narrowly squeaking into the top 10 at the end of qualifying. The Tekno Autosports Commodore set an early benchmark that could not be matched by the following entries of David Reynolds, Fabian Coulthard and Tim Slade.

Winterbottom had been the last car on the circuit after topping qualifying, but never threatened to take pole – the Orrcon Ford losing 0.3s to Lowndes’ benchmark in the first sector alone.

The V8 Supercars will return to the Adelaide Parklands Street Circuit for a morning warm-up at 905 tomorrow.

See below for the full Race 1 starting order