The COTF prototypes in the Adelaide pitlane

James Courtney and Dean Fiore have become just the third and fourth V8 Supercars Championship drivers to get behind the wheel of the category’s Car of the Future prototypes.

The pair drove the cars in a ‘meeting rides’ session held at the Clipsal 500 Adelaide event this evening.

Run by a combination of Matt Stone Racing and V8 Supercars staff, the cars were also seen in the Dunlop Series meeting rides session yesterday, where they were steered by previous COTF test drivers Rick Kelly and Mark Winterbottom.

While far from comfortable with the ergonomics of the test car, Courtney said that he enjoyed the experience.

“When we put all of our own creature comforts in and set it up how we want, they’ll be a very good thing,” Courtney told Speedcafe.com.

“The throttle feels quite light because it’s fly-by-wire, which is a strange feeling. It turns quite well, the (transaxle) gearbox is nice and sharp and precise, there’s no craziness going on there.

“I wasn’t in my own seat, I was sitting in the wrong position and was cramped up, so it wasn’t possible to give any decent feedback, but you get a good idea of what’s going on. 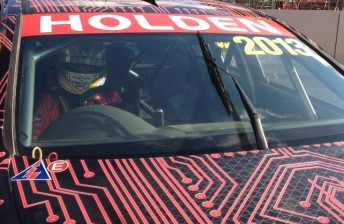 James Courtney in the Holden prototype

“Doing this puts more strain on the car than a normal circuit, given that it’s quite aggressive with bumps and kerbs, so I think it’s good they can get them around and run at different places.”

The cars appeared in Adelaide at the request of the Clipsal 500 race organisers, and according to V8 Supercars’ communications manager Sam Heard, are unlikely to become a regular fixture of the meeting rides sessions this year.

“We have no plans to do other events,” Heard told Speedcafe.com.

“That could change, but at this stage, the only running they’ll do is at specific test outings.

“Maybe, we could have them at Queensland Raceway and the Gold Coast, because they are located up there, but at this stage, there’s no plan to have them anywhere else.”

Full-scale Car of the Future testing will recommence later this month, with tyre and brake testing on the agenda.

Aerodynamic testing was to have commenced in February, but has now been pushed back in order to coincide with the development of Nissan’s V8 Supercar entry.

The Japanese maker had hinted that it would reveal the details behind its engine program at the Clipsal 500, but has since decided to delay any further announcements.

CLICK HERE for Speedcafe.com’s previous story on the Nissan prototype