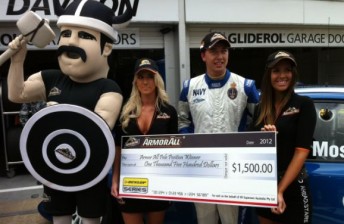 Chaz Mostert with the Armor All Pole Award

Ford Performance Racing’s Chaz Mostert will start the opening race of the 2012 Dunlop Series from pole position following the completion of qualifying in Adelaide this morning.

McLaughlin knocked Walkinshaw Racing’s Nick Percat from the front row in the dying minutes, while Scott Pye and Tim Blanchard will start fourth and fifth respectively.

“The car was just hooked up and it was great,” said Mostert of the session.

“The FPR guys worked really hard over the off-season, so I’m happy to deliver them first pole of year.

“In practice we were running second to Nick, but to get him in the qualifying session was what mattered.

“The car’s lightening, I can’t wait for the race.”

The session was punctuated by an early red flag, called for simultaneous incidents for Marcus Zukanovic and Elliot Barbour.

Zukanovic’s Greg Murphy Racing Commodore had been beached in the Turn 11 gravel trap, while Elliot Barbour lost control of his Minda Motorsport Commodore at the exit of Turn 7 – resulting in head-on contact with the inside wall. Neither driver returned to the circuit for the remaining 20 minutes of the session.

An unusual occurrence befell David Russell in the final minutes of the session, with a rim splitting on the right-front corner of the Dreamtime Racing Commodore.

The first Dunlop Series race of the season kicks-off at 1850 local time this evening.